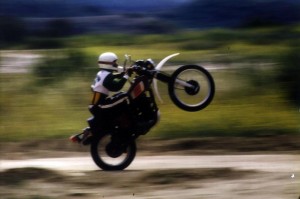 Motorcycles have been a part of my life ever since about 1970 when I got my first mini-bike with a 5HP B/S engine.  Forty years, and nearly 30 bikes later, I’m still as hooked as ever on them.  Most of the bikes I’ve had were dirt bikes, but I enjoy road riding as well.  I’m a big believer in first learning to ride on the dirt, and getting to be an experienced and proficient rider, before ever going on the street.  Then, if you still want to ride on the street, take a motorcycle safety course first, and ride at your own risk.

My best advice for the street.. make yourself as visible as possible, assume that no one else can see you and that all vehicles are going to pull out in front of you. And for the dirt, when in doubt gas it (this really is true), but never ride beyond your vision.  I wear all the protective gear I can on both the dirt and street.